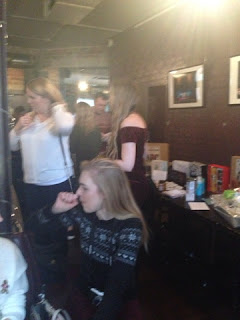 On Saturday I attended my first ever bloggers meet up. I thought I wouldn't be nervous, as I usually take everything in my stride, and speak to anyone. How wrong was I?! As soon as I saw people I knew from their blogs I was like, awkward as *expletive*. However, it turned out to be amazing. 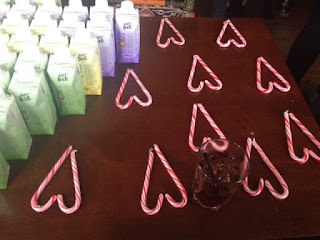 This are candy canes and the Just Bee drinks for everyone!
So, let's start with the question always asked - How?
I saw on twitter that the lovely Rhianna her twitter is robowecop who blogs over at robowecop  was asking if anyone fancied a meet up around Christmas time, it was to con-inside with another meet the same day in Milton Keynes.
Unfortunately the other meet was postponed but ours up t'north was still to go ahead! Yay. 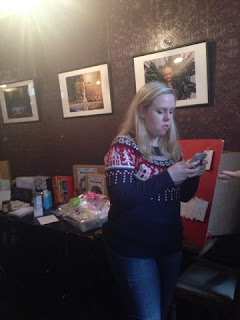 So that was back in August, fast forward to December and a few exciting email later, in I walked to the Black Swan on Call Lane in Leeds. Thought I was in the wrong venue, but asked some girls and yes I was here, but up stairs.

I walked into the room and got very nervous, so many faces, some of whom I love their blogs, some who I hadn't had the pleasure of meeting. I saw Rhi and hugged her, took my coat off and sat down.

After which Kellie over at Big Fashionista blog told me to get up and mingle. Which paid off as I met some really lovely girls and had a right old laugh! So thank you so much Kellie for getting me out there!

Everyone looked so amazing, with the Christmas theme we were asked to wear Christmas jumpers, or make outfits up, and the effort people made was brilliant! Dresses like Christmas trees, or snow scenes and jumpers knitted, or hand made.
I opted for my red The Blackout jumper, which has little reindeers humping on it, then my t-shirt was a deer that says "All I want for Christmas is to party". Apt for me! 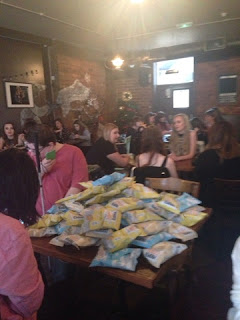 Here are the girls on the table in the middle, who I got chatting with!
There was a selfie station set up with Christmas theme props, a cupcake decorating competition and a raffle, which EVERYONE was excited about due to the amazing array of prizes on show! Me being one of them, so I bought £8 worth of tickets, as they were £2  a strip. 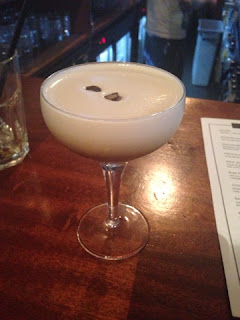 Espresso Martini to wake me up and feel in the party mood.

I got myself a lovely Espresso Martini at the bar and enjoyed that, half way through the day. I got chatting with some girls who invited me to sit with them on their middle positioned table, and who were telling me about other events, and things coming up for them. 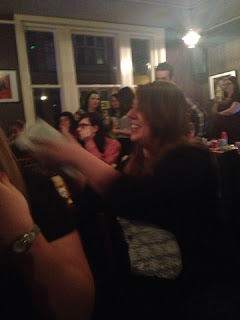 Everyone being all excited!

All the girls were super lovely, that I spoke with and really welcoming when I mentioned it was my first event!
So, let me go around the girls and their blogs, Ashton is over at beautybooksandbabble was the first to say let's give a cheeky twitter follow, to which Jordan who is over at jordancourtney followed too, which was exciting as I bloomin' love Twitter!
Then Chichi who blogs over at chichi-writes told me that she's in Leeds for Uni and is from London, which is exciting as I love London, but do love coming back North! Ha! Alex over at champagneandlemonadeox told me about some other events she'd attended which was really brilliant to hear about! Then Becky over at beckyisobel mentioned it was her first event, like me, too! 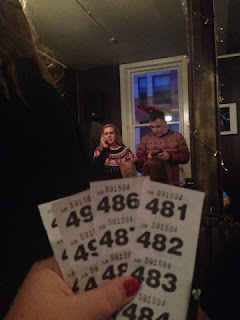 My raffle tickets. Sadly not winners. But great to take part!

After we'd all chatted excitedly for most of the afternoon, it was 4pm and time for the raffle, and we all excitedly got out our tickets, and clutched onto them like they were gold!
Sadly I won nothing, but Ashton did! Yay! It was exciting see if all happen anyways!
Also, all the money raised in the raffle is going to the charity Young Minds, which Rhi picked and I think is a great cause!
Young Minds twitter - YoungMindsUK 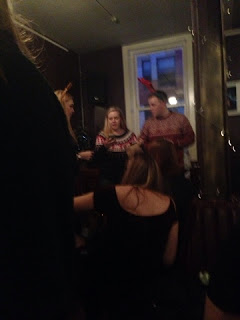 Then Rhi gave a little speech, and thanked us for going, and she then was given a little present, which we had all put in money for, and rallied around to get her something special. It turned out to be the new Gwen Stefani palette and a Charlotte Tilbury lipstick! Lovely, and very muched deserved, for organising the amazing event! 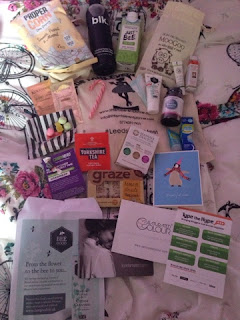 How great are the goody bags and contents!

We were informed we could pick up our goody bags, and we did, so that we could go through it all! Yay! I'll do a little post on it all, as there is SO much to go through!

Then it was time to head off, as I was going to see Faithless in Manchester that night, but there was another blog event, which I was sad I couldn't attend, now that I'd made some great new blogging friends! 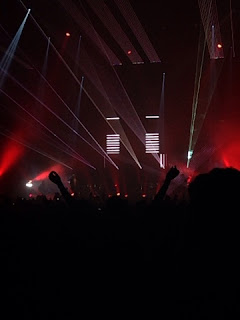 Faithless at night were amazing!

It was such a lovely day, even though it was awkward at first, I would definitely put my name down for more events, as meeting all the different people is the best part about it!
Hopefully I'll see all the brilliant people soon!
A big thank you to Rhianna, and hopefully it can be a yearly event! But with a little help from everyone else! :)
at December 13, 2015
Email ThisBlogThis!Share to TwitterShare to FacebookShare to Pinterest
Labels: Bbloggers, Black Swan, blogger meet, Christmas, Event, friends, Leeds, LeedsXmasMeet, people