I had got some free tickets for the cinema, while munching on some sweets, aptly named Sweet Sundays, and they had to be used by 1st November, so me and My Dad picked The Martian to go see this week! 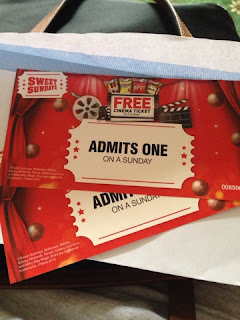 My own picture, tickets from my tickets for Mars Sweet Sundays promotion 2015.

I didn't know much about The Martian, apart from the odd synopsis given by Matt Damon on The Graham Norton Show the other week, that he was stranded on Mars, and that sounds rubbish, but it's really good. It sold me! Ha. 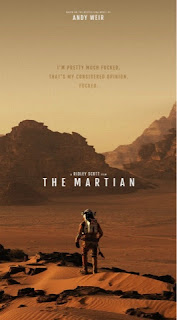 SOURCE HERE
I was actually expecting it to be a follow up to Interstellar, which I had recently seen here. But it was just a coincidence that Matt Damon was playing another Astronaut, and in fact this was a Ridley Scott film, so I expected exciting things to come in the next 2 hours and 20 minutes, and woah, it did not disappoint!

The story unfolds, as a mission to Mars to collect dirt samples has to be abandoned due to a storm warning, which hits more unexpectedly than promised, and the call is made by the Commander Lewis, played by Jessica Chastain, to abort and get ready for take off. The crew leave the craft, to get ready for this, as the storms grows debris is thrown and hits Mark Watney, knocks him into the storm, not to be seen by his crew members and presumed dead. They take off, to endure the months journey back to earth.
The camera pans to  a pile of red Mars sand, and an arm, which moves and we find out Watney is still alive! The film then follows the character of Mark Watney, the expiditions own botanist who goes through all the emotions, to stay alive on the red planet. 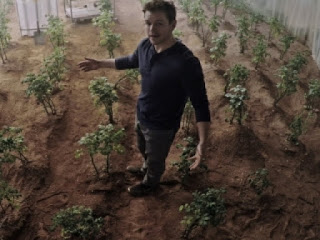 The funny diary updates, into on board cameras and dancing to the awful disco music left behind by his Commander Lewis on the Mars station, makes for excellent viewing. There are many trials and tribulations that Mark Watney is faced with, yet he never loses his mind, or doesn't become the stereotype bitter character, he keeps the sight of hope in his grasps, ready for the rescue pod, which may land in 4 years time.

I admit, I cried a few times, when there was no hope, and when the ending came, and found myself rooting for this guy, up on Mars with no one.

With a varied cast of stars, such as Jeff Daniels playing the Director of NASA Teddy Sanders, Kristian Wiig the Spokesperson of NASA, Sean Bean as the crew supervisor or the crew of the Mars expedition Ares 3 including well known faces; Michael Pena, Kate Mara and Sebastian Stan, it seemed a little too OTT a cast to hit the right format. Nope, how wrong I was, it all fitted perfectly, no chosen cast too strange or too big, and everyone played their smaller parts really well.

It is great to see  a different character again from Matt Damon, with the light-hearted parts while dancing to "Hot Stuff" or losing control when speaking with NASA about the failed rescue attempted launch. His funny lines make for a great cinematic experience too with his "Space Pirate" quip or when he plants his potatoes in his poo. Yes, and he plays it out EXACTLY how we imagine it to be like. 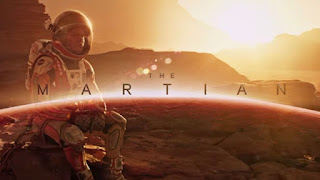 SOURCE HERE
Ok, so it's a bit out there, but you never know, our near future may bring such space exploration, with the recruitment of people emigrating there in the next 50 years!

I think The Martian is an excellent picture, and definitely one of the best of 2015! A bold statement, as there are so many brilliant films around right now, but this definitely got all my emotions going, but in a great way, and I left feeling happy. Good going for such a bleak outlook most of the film! :)
at October 23, 2015
Email ThisBlogThis!Share to TwitterShare to FacebookShare to Pinterest
Labels: Mars, Matt Damon, Showcase, The Martian