I know I don't usually do many film reviews, but I am thinking of branching out, as I watch SO many, like I watch at least 5 a week!
Anyhow, last night I decided on Everest, newly out, I thought I'd give a watch. 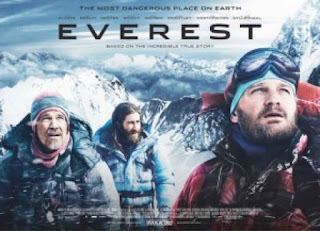 Everest is set in 1996, about an expidition that went unbelivably wrong, while trying to conquer the worlds largest mountain.

It is set in May, which is the best time to climb to the summit, as the weather is best that time of year up the mount of Everest, but the film shows that that year in 1996, the weather had been particularly bad, and had forced all the groups, to choose the same weekend, whereas usually they are spaced out. This in turn caused a bottle neck, on the ledge, and at the camps before the summit. 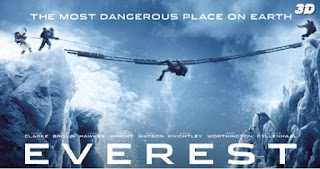 Half way through I got curious, how true to life was this blockbuster of a film, it seemed incredible, that their tour guides let them all congregate and go up the mount, even when the conditions worsened the night prior to the climb, there were no warnings or stops put in place. Then comes the lack of ropes in place, where the sherpas were supposed to set them. The lack of oxygen. The last phone call. It must be Hollywood land making it up and exgagerating as usual.

Nope, it all happened. They all decided that May 11 1996 was the day to clim to the top, the summit. I read up that 2pm is the usual cut off to enter onto the camp IV, before the summit, but due to all the climbers the bottle neck forced people to try after the cut off, which in turn on their decent, sealed their fates. The lack of Oxygen happens as the climb enters such heights, plus their tanks were below, yet the altitude sickness made people think they were empty. The last phone call happened on the mountain. 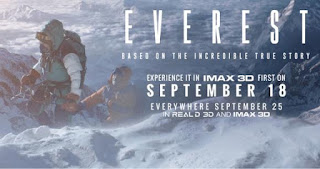 It is such a shockingly moving movie and I would definitely recommend seeing it in all it's awe. It's an IMAX film too, so the definition of the events will be breathtaking, and yes, I did cry a lot at that last phone call. I am also very much freaked out at the thought of the poor people still there, their bodies frozen in the ice, and named "Rainbow Valley" due to all the colourful snowboots and ski coats. Awful.

However, the characters portrayed got a great rememberance, the heart wrenching performance by Keira Knightly as the phone call taker, and Jake Gyllenhaal's final moments in the snow are sad. It is a great movie and the realisation that we are all mortal rings true in this.

My source of information while watching the film was taking from here.
All photos from film webpage.
at September 23, 2015
Email ThisBlogThis!Share to TwitterShare to FacebookShare to Pinterest
Labels: 1996, climbing, Everest, film, IMAX, Movie, review